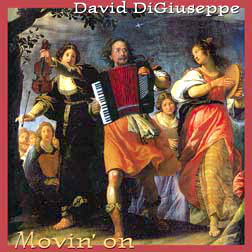 “Lawrence Welk was NOT my inspiration!” David DiGiuseppe

Accordionist David DiGiuseppe has many influences, but he and the famous polkameister have little in common. That much is obvious from DiGiuseppe’s CD release Movin’ on, which showcases his trademark blend of Irish tunes, Parisian musettes and old-time fiddle music from the American South. Add to this worldly combination the rhythmic drive of a New England-style contra dance band veteran, and DiGiuseppe emerges as a most distinct stylists –on any instrument.

Movin’ on features DiGiuseppe’s ever-fiery accordion fronting a delightful collection of spirited jigs, driving reels and beautiful waltzes. A multi-dimensional musician, he adds four vocals to the mix and plays mandolin and cittern as well as the squeeze box. Many of the pieces are newly composed by DiGiuseppe or his contemporaries.

Pianist Pete Campbell and guitarists Jonathan Byrd and Joseph Sobol accompany DiGiuseppe on the instrumentals, while the vocal tracks include viola, clarinet, wooden flute and dulcimer. 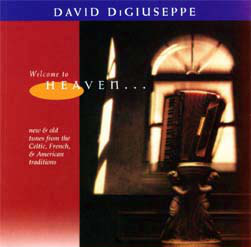 In Welcome to Heaven… David DiGiuseppe presents masterfully rendered American, French and Celtic dance tunes, staking out new territory on his piano accordion. Although the button accordion has long been accepted as a folk instrument, very few piano accordion players have utilized their instrument’s flexibility and orchestral potential and applied it to this idiom.

But David DiGiuseppe has. In this remarkable and lovely CD, DiGiuseppe’s accordion breathes life into a series of suites and dances, and even takes the place of the driving fiddle in two old timey numbers–and it works!

Boy, can this guy play! Some people can fake a chord or two on the piano accordion, maybe play a little harmony, but David DiGiuseppe has done his homework, chosen some great material, assembled a bunch of flexible and talented sidemen and the result is captivating…(T)here is a wide and stunning array of music represented here…DiGiuseppe handles them all deftly.

…The arrangements are right on the money for the particular appeal of each tune, and DiGiuseppe resists the impulse to go over the top with so much talent at his disposal. The angels don’t get much better than this.
Mary DesRosiers, Sing Out!, Vol 41 #4, 1997

Gary Larson’s ‘Welcome to Hell, here’s your accordion’ cartoon was just one example of our culture’s rejection of the accordion as nerditude par excellence. But the squeeze box has been making a comeback in recent years as ethnic old-time music have gained in popularity. While the piano-keyed variety is somewhat less common in the Celtic tradition than the button accordion, lots of good players are out there. One such player is David DiGiuseppe, whose album Welcome to Heaven is an affirmation of the accordion as one cool piece of hardware. DiGiuseppe is not just a player of Irish and Scottish tunes, but instead a roots music conniver who squeezes his way merrily through Parisians musette, old-time, bluegrass, contra dance and tango as well as lots of Irish tunes. There are many fine tunes on Welcome to Heaven, some traditional, some composed by such folks as Liz Carrol, and even a couple written by DiGiuseppe…resulting in a nicely varied sound, never monotonous and never dull. If you like your Irish tunes mixed with other styles, you could do much worse than this.
Steve Winick, Dirty Linen, #68, 1997

The accordion is on the rise again in America and it’s thanks to either visiting proponents or homegrown players like David DiGiuseppe that the public perception is better than before. “Welcome To Heaven” sees a musician with his feet in the predominantly Celtic camp using the great tunes written by other musicians . . . A player of immense talent and vision, David DiGiuseppe is a musician worth encountering.
John O’Regan, Limerick, Ireland 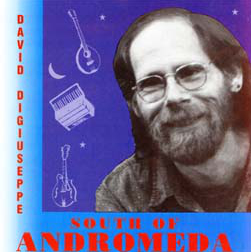