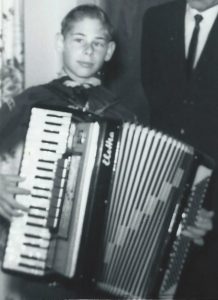 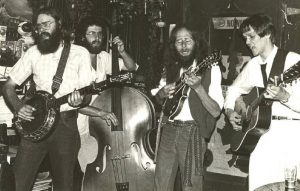 David DiGiuseppe is a multi-faceted performer who has been playing professionally since 1978. A nationally recognized accordionist, DiGiuseppe is known for his fiery and emotive playing and offers a variety of programs, including music from Celtic, French, Italian, and American traditions.

David currently tours the US with his New England-style contra dance bands Contrazz and FootLoose, and periodically as a member of Playing With Fyre. DiGiuseppe is also a member of the trio Craicdown performing acoustic roots music.

As a singer, multi-instrumentalist, and storyteller, David presents programs for schools, arts councils, libraries, and museums throughout the Carolinas, offering fun family concerts and educational lecture/performances on American and Carolina history.

A Brief History
DiGiuseppe’s musical career began at the tender age of three in the local barber shop, where he was often lifted onto a chair and encouraged to sing his favorite songs. At the impressionable age of eight, he was taking accordion lessons, becoming a model student at Petteruti’s School of Music in Providence, RI. By twelve, the accordion was in the closet and Beatles’ tunes could be heard emanating from his guitar.

David began playing professionally as a mandolinist in 1978 while living in Worcester, MA. Never content at doing too much of the same thing, from 1978-85 he performed with: Steamfoot, a bluegrass band; Castle Hill String Band, a bluegrass and jug band; Musique Noveaux, performing avant-garde classical music; Two Finger Snap, an acoustic jazz quartet; the Providence Mandolin Orchestra; and the Cambridge Harmonica Orchestra.

In 1985 he moved to Durham, NC where for three years he toured and recorded with the well-loved Big Zucchini Washboard Bandits, performing throughout the United States and Canada.

In 2009 his composition Le Vin was nominated for a Just Plain Folks Music Award in the World Song category.

Recordings
David is featured on many recordings, including his release Movin’ on, his second CD Welcome to Heaven…, and his first solo recording South of Andromeda. Reviewer John O’Regan of Ireland wrote, “a player of immense talent and vision, David is a musician worth encountering”.

Drawing from both traditional sources as well as penning much of their own material, Craicdown’s debut CD entitled Roads features both songs and instrumental pieces ranging in style from Americana to reggae-sounding vocals, from Celtic influenced jigs and reels to the music of Brazil and Argentina.

Books
David has published six books for the accordion through Mel Bay Publishing.

The Mighty Accordion–The Complete Guide to Mastering Left Hand Bass/Chord Patterns is a unique and much-needed guide to playing the bass side of the accordion, offering a comprehensive collection of progressive exercises for learning and mastering bass/chord patterns.

Favorite Hymns and Gospel Songs for Accordion–A collection of the most-loved, all-time favorite gospel songs and hymns for accordion.

David’s first book 100 Irish Tunes for Piano Accordion is a collection of traditional Irish jigs and reels arranged for the accordion.

Coming Soon…The Mighty Accordion Volume 2
A Complete Guide to Mastering Left Hand Melodies, Walking Bass Lines, and Chord Progressions
An essential and unique method book for improving left hand skills for the accordionist. A comprehensive series of graduated exercises designed to improve finger strength and dexterity while teaching how to play melodies and walking bass lines. These skills are then used to explore ways to play contemporary chord progressions. 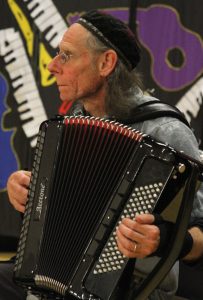 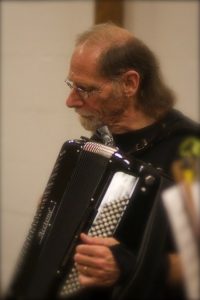